Home
Animals
Most People Walked By This Desperate Dog, But One Girl Decided To Change His Life

Everyone likes to bring something home from vacation. Souvenir shopping may be the best part of traveling. People usually bring home a trinket or t-shirt, but for Reddit user Meagan Penman, her souvenir from Thailand was a lot cuter (and heart-breaking).

While visiting the beach one day, Meagan saw this poor pup dragging himself across the sand.

He had lost use of both hind legs following a motorcycle accident, but his current owners did nothing to ease his condition. Imgur
Dragging his legs gave him multiple friction wounds on his body. Plus, he was clearly malnourished and covered in parasites.

But one look at this sweet face and Meagan knew she needed to take action. Imgur
She contacted several rescue facilities in the area but none were able to take him in due to their already overwhelming numbers.

So she decided to take him back with her to Canada. Imgur
But first, she needed to raise the funds. Transporting the pup, now going by Leo, wouldn’t come cheap.

While Meagan returned to Canada to prepare for her new buddy’s arrival, he stayed in vet’s care and got healthy enough for travel. Imgur
In the meantime, Meagan set up a fundraiser to help with the expenses.

Two months later, he was ready to make his way to Canada! 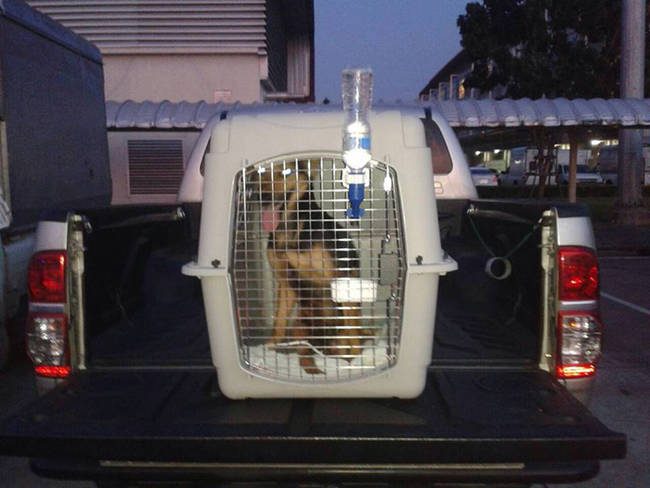 Imgur
He looks excited to see his friend again soon.

Finally, reunited with Meagan after a long journey. Imgur
He arrived last month and has began his adjustment to the new environment.

Now in a happy, loving home, Leo is receiving the care he so desperately needs and deserves. Imgur
But his needs are particularly special, requiring much more funds than Meagan originally thought.

She is relying on contributions from those touched by his story to help with his many medical issues. Imgur
Still under a year old, the pup suffers bladder issues which may last his lifetime and he might also require surgery on top of his prescriptions and special diet requirements.

Luckily, the little guy has received an incredible outpouring of support. Imgur
But his longterm care still carries a hefty vet bill, so donations are still very much encouraged. Imgur
Thanks K9 Carts, life for Leo will never be a drag again.

The poor guy has a lot trying to bring him down, but both he and Meagan are fighting to make sure he has the best life ever. You can help Meagan continue to provide the best care for this beautiful boy by contributing to Leo’s fundraiser.

For more information on how he’s adjusting to his new Canadian residency, check his Facebook page.