Russell the cat has impressed the staff at Animal Emergency Hospital and Urgent Care Clinic in Raleigh, North Carolina in many ways since arriving as a patient more than a year ago. The cat not only survived a terrible house fire that destroyed his home and left him with severe burns, but he is also full of love and compassion for the animals they care for.

The inspiring orange cat has been comforting many of the sick or abandoned animals that the clinic takes in, including a fawn! He makes sure to snuggle up next to them and purr in their ear.

The staff say that Russell is a very curious and loving cat who wants to be friends with everyone. He recently provided comfort to a baby deer named Darla. She was discovered on someone’s lawn and when she attempted to nurse from a dog, it was clear that she was orphaned and brought to the clinic.

“Russell the man has been showing Darla the ropes and sharing his bed,” remarked the clinic staff. Russell sadly lost his dog companion in the fire, but has made many new doggie friends at the animal hospital. Roscoe the stray Chihuahua is one of those pals. He eye was injured after an attack by a dog. A stray Labrador Retriever named Squirrel was hit by a car. She soon found herself being comforted by Russell too. As for getting comfort himself, the staff love Russell dearly. They say he isn’t quite ready to go home yet.

He’s gone through dozens of surgeries and treatments, but he still needs hands-on care. And his family home still has to finish being rebuilt.

Until then, the compassionate cat will continue to dispense his unique brand of medicine and inspire everyone he meets. 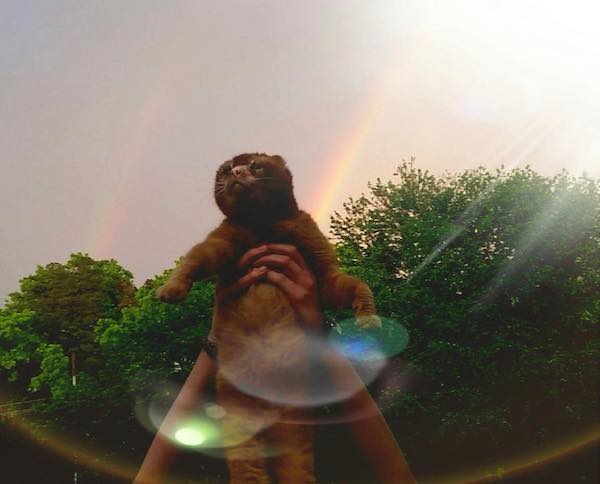 If Russell’s story touched your heart, be sure to “Share” it by clicking below!